The analyst views this move by the agency as another sign of flexibility especially for first-in-class therapies, which bodes well for eteplirsen, SRPT’s lead drug candidate, which is designed to enable the production of a functional internally truncated dystrophin protein in patients with mutations amenable to exon 51 skipping.

The NDA acceptance for eteplirsen is expected over the next few weeks, and the analyst does not expect an RTF given the interactions Sarepta has had with the agency over the last three years.

“Finding from the first three biopsies were independently validated, based on feedback from the agency. Positive findings support the mechanism of action of eteplirsen because deficiency of functional dystrophin appears to be the proximate cause of the symptomatic and functional consequences of dystrophinopathies. We continue to believe de novo dystrophin serves as a surrogate, which is reasonably likely to predict clinical benefit, and eteplirsen merits an accelerated approval,” the analyst wrote

The analyst maintained a Buy rating on shares of Sarepta Therapeutics, with a price target of $45, which represents a potential upside of 25% from where the stock is currently trading.

Out of the 16 analysts polled by TipRanks, 9 rate Sarepta Therapeutics Inc. stock a Buy, while 7 rate the stock a Hold. With a downside potential of 4%, the stock’s consensus target price stands at $34.55. 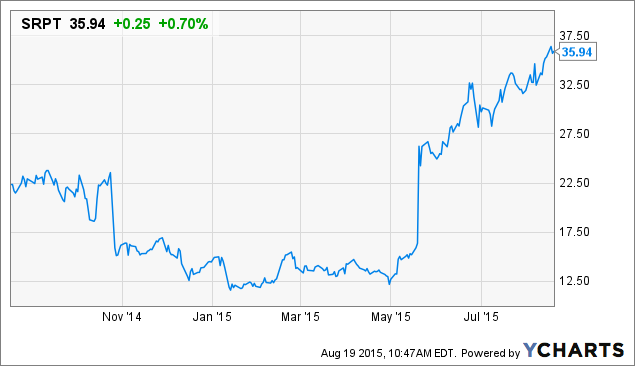