Roth Capital analyst Debjit Chattopadhyay came out today with a favorable note on Sarepta Therapeutics Inc (NASDAQ:SRPT), following a negative article published in the Wall Street Journal comparing Sarepta with its mature peer, BioMarin Pharmaceutical Inc. (NASDAQ:BMRN), on a 2016 price/sales metric. The analyst thinks that the article is both juvenile and uninformed,

Chattopadhyay noted, “We are cognizant of the risk of recommending Sarepta shares heading into 2H15, but believe Sarepta is now significantly well positioned and has a better drug than BMRN, and do not expect an RTF.”

The analyst thinks it’s highly unlikely that the FDA would asked SRPT to proceed with the filing only to hand it an RTF in 60 days. He stated, “Sarepta will initiate a rolling submission, with the first two modules to be completed this week and the final module on track for mid-’15. Additionally, the independent re-scoring of dystrophin has presumably not raised any red flags and nor would the FDA have asked for the fourth biopsy or suggest a 96-week open label study if it had no intention of moving forward.” 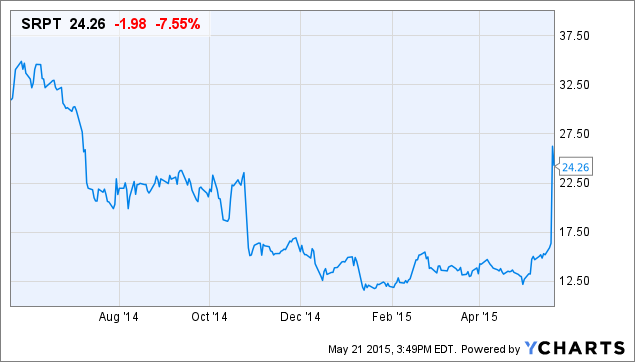