In reaction, Roth Capital analyst Philip Shen reduced the price target to $40 (from $46), while reiterating a Buy rating on CSIQ stock. Shen commented: “Sentiment among solar stocks is currently negative, and we believe the Q3 misstep could challenge the stock in the near-term. That said, we would be buyers of CSIQ on weakness. While yieldcos are currently out of favor, we eventually expect the appeal of yieldcos—and of CSIQ’s future yieldco—to return. We maintain CSIQ as a top pick in our universe despite the negative sentiment.”

“What differentiates CSIQ vs. peers, in our view, is the company’s robust downstream strategy; it is the only company in our module coverage universe that has a legitimate near-term path to launching a yieldco. Although yieldcos are no longer in vogue—for now —we fundamentally believe the quality of solar asset cash flows are high and that there is tremendous amount of growth ahead. We expect demand for these assets to come back and with it a meaningful competitive advantage,” the analyst added.

According to TipRanks.com, which measures analysts’ and bloggers’ success rate based on how their calls perform, analyst Philip Shen has a total average return of -14.5% and a 22.1% success rate. Shen has a -4.0% average return when recommending CSIQ, and is ranked #3713 out of 3740 analysts.

Out of the 6 analysts polled by TipRanks, 4 rate Canadian Solar stock a Buy, 1 rates the stock a Hold and 1 recommends to Sell. With a return potential of 131%, the stock’s consensus target price stands at $46. 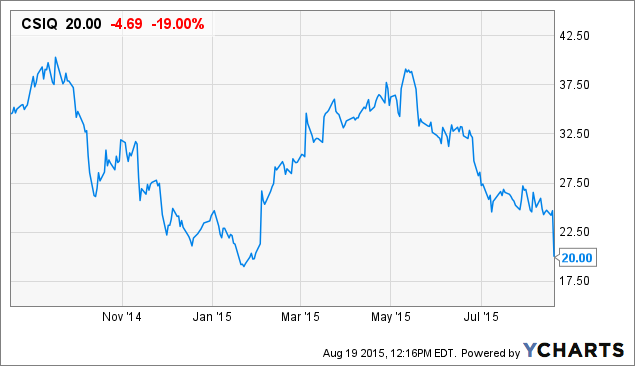