Roth Capital analyst Scott Henry maintained a Neutral rating on Alexza Pharmaceuticals (NASDAQ:ALXA), and reduced his price target to $2.50 (from $5.50), following the company’s third-quarter results, posting revenues of $0.5 million, which was below Roth’s target of $1.5M.

Henry noted, “ALXA reported EPS that was within expectations, but perhaps viewed negatively due to low Adasuve reported sales ($900K shifted into 4Q14). We remain positive on the long-term prospects for Adasuve, but will choose the sidelines until a revenue inflection point and/or a financing path to profitability is more visible.”

According to TipRanks.com, which measures analysts’ and bloggers’ success rate based on how their calls perform, analyst Scott Henry has a total average return of 8.8% and a 49.2% success rate. Henry has an -22.9% average return when recommending ALXA, and is ranked #571 out of 3365 analysts. 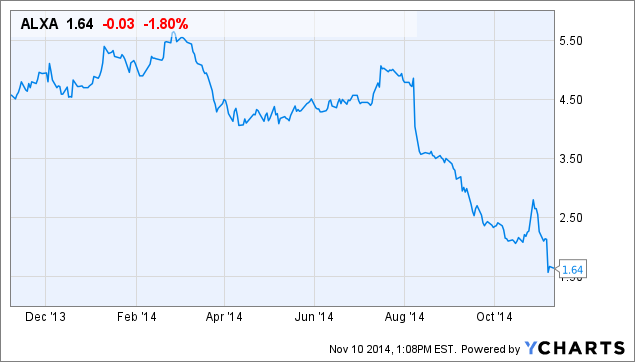 Alexza: We believe In The Long-Term Potential, But We Will Choose To Be On The Sidelines, Says Roth Capital