In a research report issued today, Roth Capital analyst Philip Shen maintained a Neutral rating on Real Goods Solar (NASDAQ:RGSE) with a price target of $1.85, as the company announced that it would exit its large commercial business (>200kW).

Shen said, “We think this is the right move for the company, and we support it as it highlights the new CEO’s focus on the greater potential value and margins in the residential/small commercial market. The sentiment in the stock appears to have shifted positive, though we remain Neutral on RGSE until we see greater visibility into its residential business.”

The analyst added, “We believe success in the large commercial segment requires scale as the margins are much thinner vs. residential. For 2014, we forecast RGSE to post ~16MW of commercial volume (flat YoY). This was likely not sufficient for the company to have the scale required to effectively compete. We expect the company to find a way to monetize this business in the quarters ahead. We plan to update our model after the segment is presented as discontinued operations in its upcoming Q3’14 release.”

According to TipRanks.com, which measures analysts’ and bloggers’ success rate based on how their calls perform, analyst Philip Shen has a total average return of 0.0% and a 30.6% success rate. Shen has a -16.7% average return when recommending RGSE, and is ranked #2405 out of 3313 analysts. 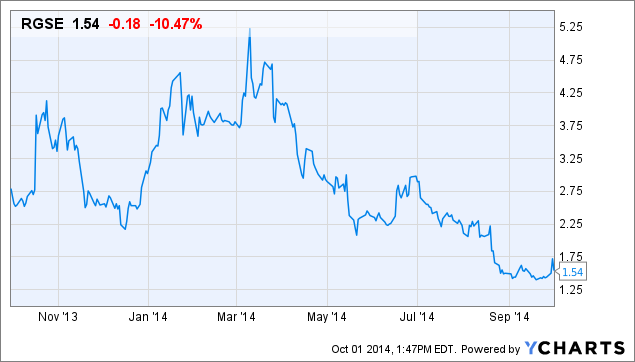