In a research note published Tuesday, Roth Capital analyst Joseph Pantginis assigned a Buy rating on Ligand Pharmaceuticals Inc (NASDAQ:LGND) with a $92 price target, in light of the news that CURx has licensed LGND’s Captisol-enabled Lamotrigine for use in epilepsy patients who are unable to take oral Lamotrigine. The terms for this global license agreement include a $22 million in potential milestone payments, Captisol sales revenue and four to seven percent tiered royalties on future net sales.

Pantginis wrote, “We view this as further validation for the potential of the Captisol-based technology as well as for LGND’s “shots on goal” business model. We believe this deal further solidifies the Captisol franchise and provides increased visibility to potentially trigger additional partnerships. Captisol material sales and royalty revenue from Captisol-Enabled (CE) products is expected to grow from both growth of existing products, such as Kyprolis, and more recent collaborations such as the one with Avion. We continue to expect continued growth out of Kyprolis and Promacta, which represent the current lead royalty revenue drivers, with incremental growth expected from Duavee starting shortly and CE-Melphalan next year. LGND’s royalty revenue model continues to bear fruit, with multiple catalysts in sight.” Pantginis added, “We recommend steady accumulation of LGND shares, as we anticipate that current revenue streams from partnered products and the broad ‘in development’ portfolio are poised to drive significant growth in the near and longer term.” 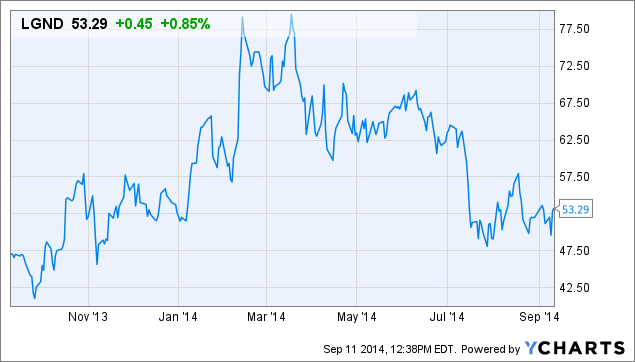