Health care analysts are weighing in today on the drug maker Keryx Biopharmaceuticals (NASDAQ:KERX), following the news that the Committee for Medicinal Products for Human Use in Europe gave a positive opinion related to KERX’s application for marketing authorization of Fexeric, for the treatment of elevated serum phosphorus levels, or hyperphosphatemia, in adults with chronic kidney disease.

The CHMP decision is not unexpected to Roth Capital analyst Joseph Pantginis, “Management has indicated that it intends to provide visibility on the E.U. commercial strategy by the end of 2015. There are several open questions regarding marketing in the E.U. and revolves around partnering the drug, in our belief. Manufacturing capacity requirements are a potential leading issue. While this represents a positive major blocking issue to generic competition in our belief, it may also act as an issue for potential partners based on the required infrastructure (or a major re-tasking of equipment) investment.”

The analyst continued, “In the end, anticipated E.U. approval is on the first step to a more complex commercial story, in our belief.” Furthermore, “We have increased trepidation as Auryxia is now in a major “show me” phase based on company guidance for meaningful prescription traction in 2H15. The prescriptions have taken a concerning dip following the recent announcement of two more private insurance payers (undisclosed) adding Auryxia to their Medicare Part D formulary.”

Pantginis reiterated a Buy rating on Keryx Biopharmaceuticals, while reduing the price target to $11 (from $23). The analyst believes Keryx will remain highly volatile and recommends owning shares by only the most risk tolerant investors currently.

According to Maxim Group analyst Jason Kolbert, the news is positive for Keryx and sales in Europe have already been reflected in his models. In the U.S., Auryxia has had dissappointing sales early, but the analyst still believes the clinical benefit and cost-effectiveness could make the drug standard of care, displacing competing products.

“Keryx continues to work to get more insurance carriers to add Auryxia to their formularies. We continue to expect sales to accelerate in 2016. We’ll have to wait for a launch in Europe, but our opinion of the drug in Europe is the same as in the U.S., its a better phosphate binder.”, Kolbert noted.

Jason Kolbert rates Keryx Biopharmaceuticals stock a Buy with a price target of $17.00, which represents a potential upside of 117% from where the stock is currently trading.

Out of the 10 analysts polled by TipRanks, 8 rate Keryx Biopharmaceuticals stock a Buy, while one rates the stock a Hold and one recommends a Sell. With a return potential of 168%, the stock’s consensus target price stands at $21. 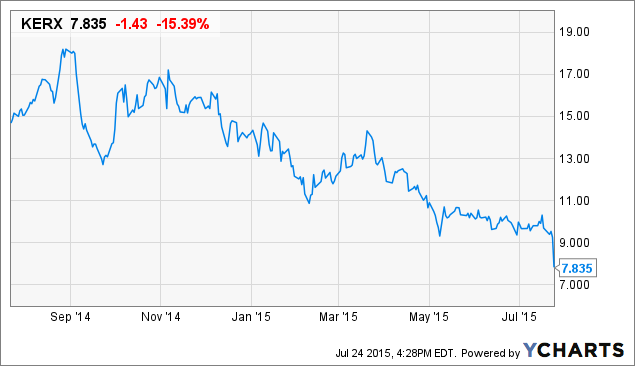