In a research note released Monday, Roth Capital analyst Joseph Pantginis reiterated a Buy rating on Regeneron Pharmaceuticals, Inc. (REGN) and a price target of $382.00 a share, which represents a potential upside of 26% from where the stock is currently trading.

Pantginis noted, “The wet AMD development space continues to show potential long term potential competition from many players. This morning, Allergan (AGN) announced Phase II data for its bimatoprost sustained-release implant in the eye comparing to a topical version of the drug and compared to Roche’s (RHHBY) Lucentis. The data showed better improvements in visual acuity compared to Lucentis with less frequents injections into the eye. Today’s news should represent a headline “negative” for Regeneron based on potential future competition in the AMD space. Recently, a competitive bank also issued a note highlighting the entrenched nature of cheaper, reformulated Avastin as well, which they believe is preventing further market share penetration by Regeneron’s Eylea. We do not believe this is the case as Avastin still faces formulation risk of potential infections and other adverse events. Regeneron has guided for $1.7-$1.8 billion in Eylea revenue for 2014 and continues to remain the lead value driver for the company. However, we believe we are only starting to scratch the surface regarding the Street’s perception of the totality of Regeneron’s pipeline. The pipeline is led by alirocumab, in worldwide partnership with Sanofi (SNY) for cholesterol. The drug is currently in a 22,000 patient Phase III program and has already started to generate positive data. Regeneron remains a strong long term pick as a “mini-pharma” and believe any negative volatility today should be taken advantage of”.

According to TipRanks, which measures analysts and bloggers success rate based on how their calls perform, analyst Joseph Pantginis currently has an average return of -7.3% and a 35% success rate. Pantginis has a 49.4% average profit recommending REGN, and he is ranked #3082 out of 3141 analysts. 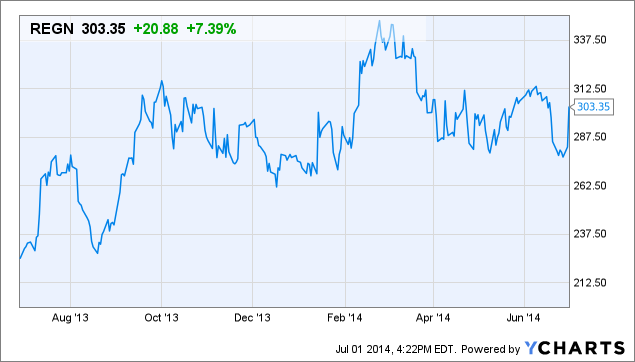