Pachter wrote, “Destiny was released on September 9 for the PS4, Xbox One, PS3, and Xbox 360. We believe the $325 million figure represents approximately five million units at a blended retail sales price of $65, making it one of the fastest selling games of all time and likely the best-selling new intellectual property of all time. On September 10, Activision Blizzard announced a Destiny sell-in (units sold to retailers) figure of over $500 million as of day one. The sell-in figure was stated as a wholesale number, and translated to roughly 10 million units, which far exceeded our expectations. Based upon the huge sell-in figure, we estimated that the game must have sold-through five million units on its first day. Instead, today’s press release indicates that sell-through level in five days, meaning the game is selling-through at a slower rate than we had anticipated.”

Pachter continued, “We continue to believe Activision Blizzard is well positioned for further multiple expansion. The company’s Call of Duty sales (packaged goods and DLC) should rebound in 2014 as we fully transition to next-generation consoles and competition appears much less fierce this holiday; its Skylanders game and toy sales reached a cumulative $2 billion, withstood an onslaught from a competitive product, and appear positioned to maintain share this year; the number of World of Warcraft subs appears to be relatively stable, and should rebound when an expansion pack is released later this year; Bungie’s Destiny is well-positioned to be its next $1 billion franchise after a record-breaking launch; and the company is seeing continued margin expansion from digital sales. While some investors may have concerns about declines for the company’s core businesses, we remain fans of Activision Blizzard. We believe the company communicates clearly, executes well, and its management appears to truly understand how to make money. We are maintaining our OUTPERFORM rating and our 12-month price target of $30 per share. We recommend that investors accumulate shares of Activision Blizzard while they remain below our price target.” 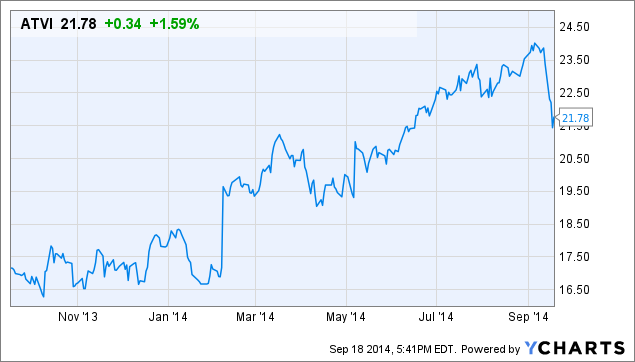