Martin noted, “Trading for 9.7x and 8.9x 2014 and 2015 adjusted EBITDA, WWWW’s valuation has certainly become more interesting, in our view. The National Account practices exit and slowed pace of improvements with certain initiatives weighs on the growth profile for the next several quarters. We believe there will be a time in the next 12 months to become more positive on the stock, but now is not the right time”.

The analyst continued, “A slowdown in improvement gains weighed on 2Q14 revenue and the outlook for the balance of the year. Management cited two key areas for the revenue shortfall in 2Q – softness in domain aftermarket revenue and timing of integration activities with the Snap Names acquisition as well as lower improvement in sales productivity in outbound telesales and the local direct channel (Feet on the Street). With shares trading down to $20 in reaction, the valuation is becoming more attractive at 8.9x 2015 adjusted EBITDA. WWWW believes double digit growth remains in sight, although timing is now in question. It does not appear a near-term event, in our view, and we therefore maintain a Neutral rating and look for indication WWWW is approaching a reacceleration of growth above 10%. The exit of the National Accounts practice takes $20mm out of revenue, suggesting it may be four quarters before the resumption of double digit revenue growth”.

According to TipRanks.com, which measures analysts’ and bloggers’ success rate based on how their calls perform, analyst Jeff Martin has a 3.0% average return and a 37.5% success rate. Martin is ranked #1859 out of 3200 analysts. 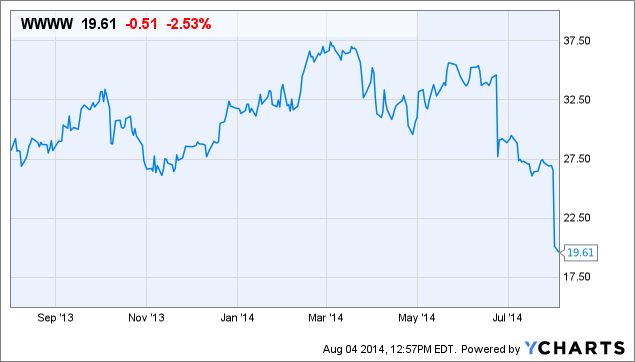