In a research report released Sunday, RBC Capital analyst Mark Mahaney reiterated a Sector Perform rating on Zillow Inc. (NASDAQ:Z) with a price target of $115, as the company posted its fourth-quarter and full year results after the close on Friday. In addition, the company also announced that it expects to close the acquisition of Trulia, Inc. (NYSE:TRLA), as early as February 17, 2015.

Mahaney noted, “Without notice, Zillow posted its December quarter EPS results after the close on Friday. Revenue came in higher than expected although EBITDA came in light. More material was the news that Zillow would close its acquisition of Trulia following FTC approval.”

The analyst continued, “Although largely expected by the Street, the finalization of the acquisition of Trulia is a clear positive for Z. Nevertheless, we view the story as remaining the same: solid fundamentals in a company without a compelling valuation + integration risk following the merger. However, following the deal, Z will be far and away the leader (not that it ever wasn’t) within Online Real Estate, a secular growth space that is benefiting from rising Mobile usage (approx. two-thirds of Z’s visits). The success of the Mortgage Marketplace also demonstrates Z’s ability to branch out into adjacent opportunities—Rentals and Home Improvement will follow suit.” 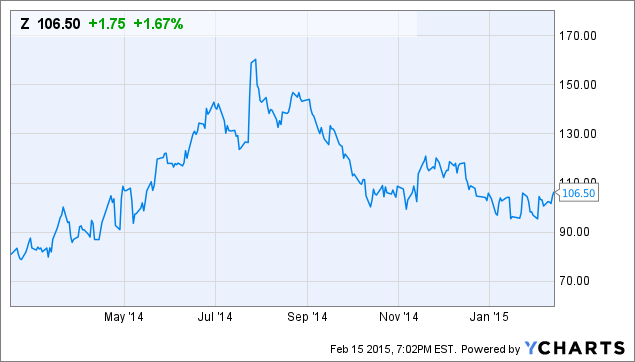