RBC Capital analyst Mark Mahaney weighed in with a few insights on Amazon.com, Inc. (NASDAQ:AMZN), after attending the Amazon AWS Summit in San Francisco yesterday. The analyst reiterated an Outperform rating on AMZN, while no price target was provided.

Mahaney observed, “Amazon highlighted a number of new product launches and reiterated that AWS has more than 1MM Active Customers (customers not affiliated with AMZN that have used the platform on a monthly basis). Most importantly, it did not announce any additional AWS price cuts today.”

“Mr. Jassy (SVP of Amazon Web Services) commented that AWS revenue is growing more than 40% Y/Y, and that AWS has greater than 5x the compute capacity of the 14 next largest providers combined. He also noted that S3 usage increased 102% Y/Y in Q4 (data transfer to and from S3) and that EC2 usage expanded 93% Y/Y in the December quarter. Additionally, AWS launched 560+ new features and services in 2014 (up from 280 in 2013), and it continues to launch new features daily.”, the analyst added.

Looking ahead, Mahaney believes 2015 EPS results, fundamental trends, and the company’s imminent new segment disclosure could all be positive catalysts for AMZN shares. 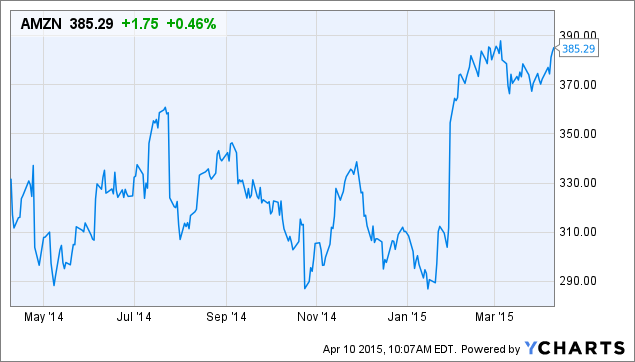