RBC Capital analyst Mark Mahaney weighed in today with his thoughts on Pandora Media Inc (NYSE:P), following the news that the company will acquire Ticketfly, a ticket agency focused on middle-market concerts, for $450 million in a cash/stock transaction. The market didn’t like the deal, sending shares down -4.55% Wednesday.

Mahaney noted, “We view the TF deal as largely neutral. In the near-term, the deal will likely be dilutive with TF probably operating at a loss and Pandora buying the asset at a higher sales multiple than where P’s stock currently trades. Longer-term, we are proponents of the revenue diversification, P further aligning itself with the music industry and the likely leverage it will receive off of its investments in AMP. Overall, this acquisition is more of a bolt-on business rather than a game changer, but we believe the strategic value is clear.”

Mahaney reiterated an Outperform rating on Pandora shares, with a price target of $24, which represents a potential upside of 14% from where the stock is currently trading.

Out of the 31 analysts polled by TipRanks, 21 rate Pandora Media Inc stock a Buy, 9 rate the stock a Hold and 1 recommends Sell. With a return potential of 11.3%, the stock’s consensus target price stands at $23.35. 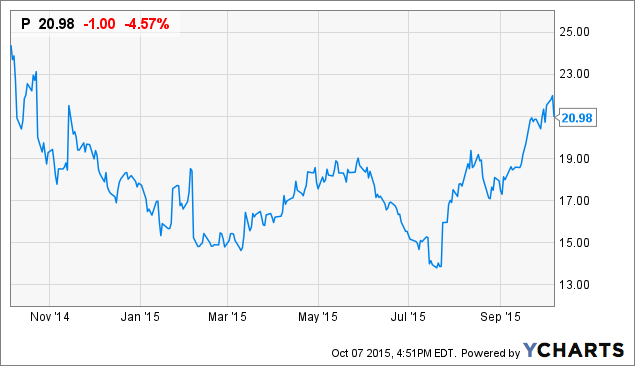