In a research report released Tuesday, RBC Capital analyst Mark Mahaney shared his expectations on Alibaba Group Holding Ltd (NYSE:BABA), as the company will report March ‘15Q results this Thursday, May 7th before market open. This will be Alibaba’s third quarter reporting as a public company. The analyst reiterated an Outperform rating on BABA, with a price target of $115, which implies an upside of 43% from current levels. The analyst stated, “Since BABA reported Dec. ‘14Q earnings, the near-term negatives have been significant: 1) The Street has been resetting its BABA China Retail monetization ramp expectations – takerates should still rise long-term, but the path will be bumpier than expected; 2) Lockup expiration re: 429MM shares on March 17th likely created some supply pressure; & 3) Claims and counter-claims between BABA and China’s State Administration for Industry & Commerce (SAIC) have created material headline risk, though we don’t believe fundamentals risk. We believe that these factors explain some of BABA’s underperformance over the past two months, but longer-term, we believe the BABA Long Thesis is very much intact.”

In the last quarter, Alibaba had a 40% increase in revenue, bringing in a total of $4.22 billion. However, the company significantly missed analysts’ estimates of $4.45 billion. Moreover, Alibaba has not had the best 2015 thus far as the company was forced to defend itself the day after they released their fiscal third-quarter earnings against Chinese authorities. The authorities claimed the company has not taken action against the sale of fake goods, bribery, and other illegal activities. 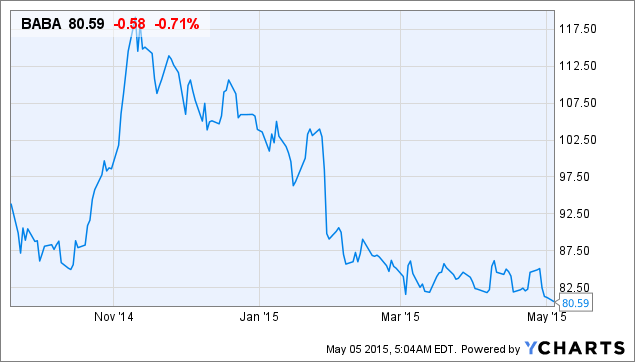