In a research report issued today, RBC Capital analyst Mark Mahaney reiterated an Outperform rating on Amazon.com, Inc. (NASDAQ:AMZN) with a price target of $410, which represents a potential upside of almost 10% from where the stock is currently trading.

The analyst reiteration is based on 4 Key Long Thesis Updates as following:

(1) AMZN’s India Opportunity – "India has become a significant market focus for Amazon, given its announced $2B investment and the fact that India is on track to be AMZN’s fastest market to $1B in GMV. Moreover, Amazon has already established a relatively sizeable presence in that market. Additionally, the India Online Retail market has the potential to be an $18B market by 2018."

(2) RBC’s Quarterly Cloud Pricing Survey – "Based on our proprietary survey, AWS remains the sector price leader (as in lowest prices). Further, pricing actions in the public cloud space over the last three months amongst most major public cloud providers have been tame (see our separate sector note). We view this as a positive for AMZN, and would note that the very steep industry price cuts that occurred in H1:14 are one of the reasons that AMZN faces easing comps in 2015."

(3) AMZN’s Long-Term Retail EPS Opportunity – "Based on our bottoms-up EPS scenario analysis, we believe that AMZN’s Retail Segment (its core business, excluding AWS) has the potential to generate $22 to $38 in annual EPS power within 10 years."

(4) An SOP Approach To AMZN – "On a SOP basis, valuing separately Amazon’s three segments (North American Retail, International Retail, and AWS) on 2016 estimates, we see a very broad potential valuation range of between $350 and $660. From today’s price level, this would imply approx. 10% downside and 70% upside. We would view this as a very favorable, asymmetrical risk-reward outlook for AMZN shares." 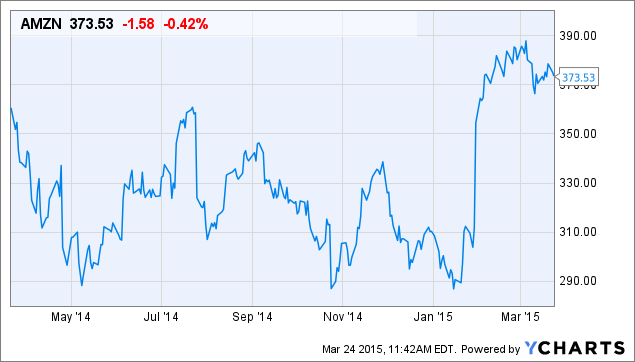