RBC Capital analyst Mark Mahaney maintained a Sector Perform rating on Yahoo! (NASDAQ:YHOO) and raised the price target to $55 (from $46), due to $15B+ savings re. tax-free spin-off of BABA stake.

Mahaney observed, “In a not totally surprising move, YHOO announced a tax-free spin-off of its 15% stake in Alibaba. This stake, plus a small, legacy YHOO business unit, will be combined into a new investment company (SpinCo), the stock of which will be distributed to YHOO holders. Given that YHOO had previously paid 35%+ taxes on its BABA stock sales, this implies value creation to the tune of $15B+. Unambiguous goodness to YHOO holders and exactly the resolution activists have been calling for.”

Bottom line, “The tax-free spin-off of the Alibaba stock is unambiguous goodness. And the $380MM in Mobile, Video, Native & Social Ad Revenue in Q4 is a distinct positive. But fundamentally – with 1%-2% Total Revenue Y/Y declines in Q4 and more of the same expected in Q1 – YHOO remains a show-me story. And we remain very concerned that strong growth in Social Media advertising platforms, the rapid rise of programmatic ad buying, and the consistent expansion of the Google ecosystem are creating intensified headwinds for YHOO. Even with the material rally in YHOO shares over the last 12 months, YHOO appears to be an inexpensive stock. But it likely deserves to be until it can generate clear signs of a fundamental turnaround.” 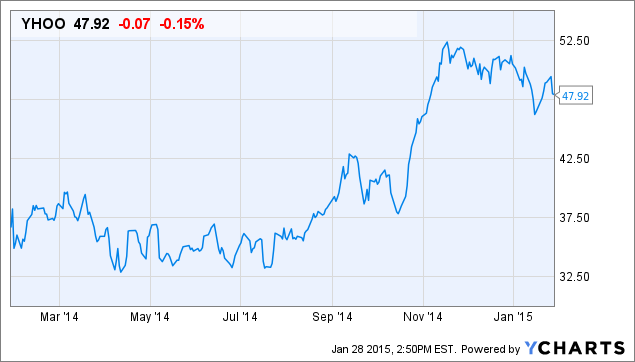 RBC Chimes In on Etsy Inc (ETSY) Amid 2Q Beat

We Continue to Like Paypal Holdings Inc (PYPL) Shares on the Recent Pullback: RBC