In a research report released today, RBC Capital analyst Mark Mahaney reiterated an Outperform rating on Priceline Group Inc (NASDAQ:PCLN) and raised the price target to $1,450 (from $1,300), as the company’s fourth-quarter results were better then feared. Revenue of $1.84B came in ahead of RBC’s estimate of $1.77B, and EPS of $10.85 upsided RBC’s estimate of $9.92.

Mahaney observed, “Given that almost 90% of PCLN’s Bookings are International, current FX conditions have created an almost Perfect Storm for PCLN. Yet, we see the company weathering through. Even in the eye of the storm, PCLN is still generating 30%+ Gross Profit growth – best read on top-line growth. Biggest opex line (Online Advertising) is now showing consistent “non-deleverage,” which means that as PCLN works through OpenTable and other non-advertising investments, bottom line growth rate will very likely accelerate to well above 20% levels. And top line comps get easier every single ’15 quarter. What we are talking about is an Acceleration Outlook, which usually works well for stocks, especially those that like PCLN began the year at very attractive trough multiples… And longer-term, per our December ULT report, we see two very substantial new growth opportunities emerging – Vacation Rentals and China Outbound.” 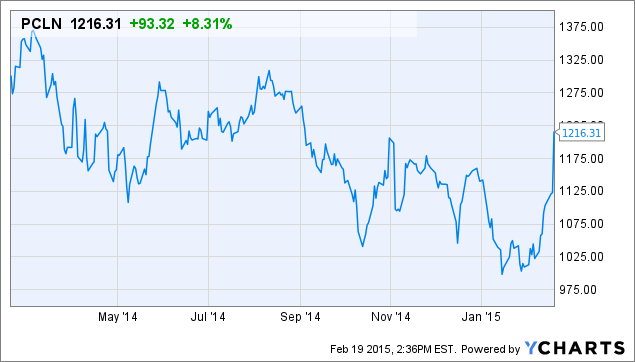