RBC Capital Comments On AT&T In Light Of Competitive Pressures

In a research report issued this morning, RBC Capital analyst Jonathan Atkin reiterated a Sector Perform rating on AT&T Inc (NYSE:T) and slightly reduced his price target to $33 (from $35), which represents a slight downside potential from current levels.

Atkin commented: “We are trimming our estimates on ongoing wireless competitive pressures and continuations in 2015. We expect subscriber growth to trend lower Y/Y in 2015, with promotions and customer retention costs pressuring margins. Wireline margins should decline Y/Y in 2015 as Project VIP enters the last phase.”

Furthermore the analyst noted, “Competitive headwinds have continued throughout2014 and recently picked up in 4Q14, particularly from Sprint directlytargeting AT&T customers with its Cut Your Bill in Half promotion. TMobile also launched its Uncarrier 8.0 initiative, which allows customersto rollover unused data to the next month. We believe Sprint’s promotionhas had success in the first half of December in driving an unfavorableporting ratio for AT&T.”

The analyst concluded, “We are lowering our price target to $33 as a result of our lowered margin and cashflow projections.”

According to TipRanks.com, which measures analysts’ and bloggers’ success rate based on how their calls perform, analyst Jonathan Atkin has a total average return of 8.8% and a 68.9% success rate. Atkin is ranked #650 out of 3426 analysts. 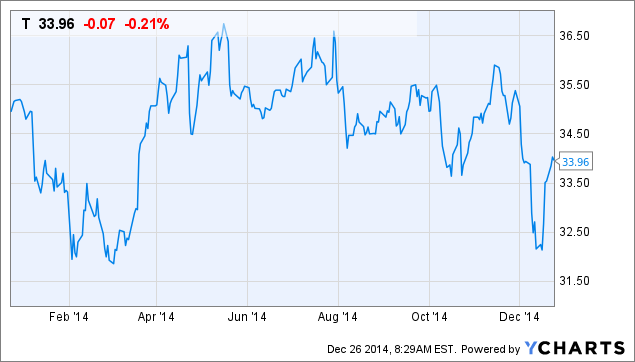