Apple Inc. (NASDAQ:AAPL)’s iPhone 6 and iPhone 6 Plus become available to consumers tomorrow, and it’s beginning to look like the smartphones are convincing more people to upgrade than previously thought. Raymond James analysts say their most recent web survey shows that upgrade intention among iPhone owners has increased.

In a report dated Sept. 17, 2014, Raymond James analysts Tavis McCourt and Daniel Toomey provided the results of their survey, which covered more than U.S. smartphone owners. They found that overall, the iOS market share seems to be stabilizing.

They noted a slight decline in the percentage of participants who owned iPhones, which moved to 47.9%. Of that number, 48.3% expected to get an iPhone for their next smartphone. The analysts said both of these percentages stayed within “reasonably tight ranges” over the last year and a half.

They added that the number of iPhone and Android phone users has been “remarkably stead,” although they think the bigger-screened iPhone 6 and iPhone 6 Plus could increase Apple’s share of the smartphone market in the next couple of years.

The Raymond James team reported that 40.9% of the iPhone users in their survey plan to upgrade this year. That’s a 220 basis point increase from the 38.7% noted in June, indicating that upgrade intention has increased since Apple unveiled the iPhone 6 and iPhone 6 Plus last week.

Those numbers compare to the approximately 25% of non-iPhone users—who were mostly Android users-who said they plan to upgrade to a new Android phone this year. The analysts also found that both Apple and Android have high retention rates, with Apple at 88.8% and Android at 86.5%. This was the fifth consecutive quarter in which both iOS and Android retention rates were higher than 80%.
Apple price target increased

In a separate report also dated Sept. 17, 2014, McCourt and Toomey explained why they increased their estimates and price target for Apple based on the results of their survey. They continue to rate Apple as Outperform but bumped their target price up from $104 to $110 per share.

The Raymond James team expects this year’s iPhone upgrade cycle to be stronger than the last two years’ cycles. In addition to bumping their iPhone estimates up, they also included a March launch for Apple Watch sales and some cannibalization of iPads due to the 5.5-inch iPhone Plus.

The analysts increased their iPhone shipment estimate to 63 million for the December quarter and 194 million for the full 2015 fiscal year. That’s compared to their previous estimates of 59 million and 190 million, respectively. The analysts estimate Apple’s user base at around 250 million and notes that just small changes in upgrade rates can result in big changes to iPhone shipment numbers.

They also bumped up their average selling price to $690, which is a $50 increase year over year because of the introduction of the more expensive iPhone 6. They expect the phablet to cannibalize the iPad “to a certain degree,” so they are projecting a 10% decline in iPad units.

The Raymond James team also estimates about 10 million Apple Watches sold in the 2015 fiscal year, starting with the March quarter. In the same survey they conducted about iPhone upgrades, they also found that the Apple Watch will probably grow the wearables category. About 11% of iPhone users and 7% of overall survey participants said they plan to buy one. 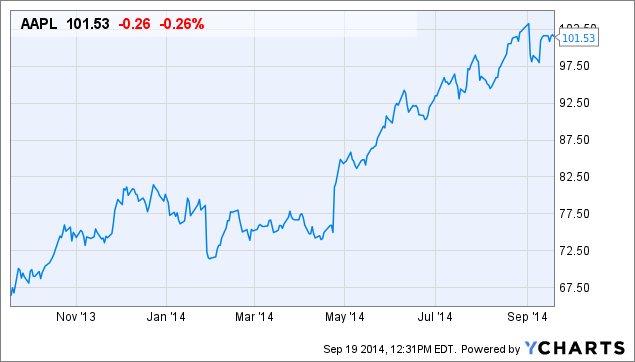