In a research report published Monday, Raymond James analyst Savanthi Syth downgraded shares of American Airlines Group Inc (NASDAQ:AAL) from Outperform to Market Perform rating. While the analyst sees similar upside at AAL to that of its legacy peers, he believes that the risk is greater due to higher earnings volatility, larger potential cuts to 2H15 consensus estimates, and a relatively weaker balance sheet.
Syth noted, “While we believe that the U.S. airline industry is maintaining capacity discipline, we now expect the recovery in pricing heading into the seasonally stronger summer months to be somewhat muted vs. previous expectations due to the softer than expected U.S. economic growth and American’s aggressive pricing response to Southwest’s capacity growth impacting markets beyond Dallas.”

Furthermore, “As discussed in our June 8, 2015 Quarterly Seat Check report, competitive capacity growth against American accelerated in 2H14 and remains elevated at ~7% y/y in 2015, with Southwest and Frontier each accounting for ~2 ppts of the y/y increase. We believe the greatest pressure on American’s domestic passenger unit revenue (PRASM) is from Southwest’s capacity growth in Dallas and its own pricing response in Dallas and other markets it competes against Southwest.”

According to TipRanks.com, which measures analysts’ and bloggers’ success rate based on how their calls perform, analyst Savanthi Syth has a total average return of 16.8% and a 71.4% success rate. Syth has a 9.7% average return when recommending AAL, and is ranked #598 out of 3612 analysts. 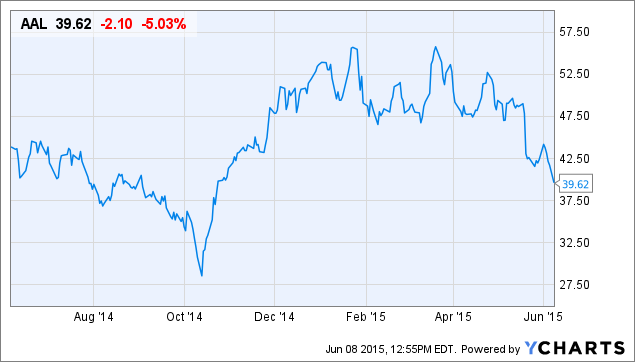