Lee wrote, “Raptor reported $16.3 million in Procysbi revenue which exceeded our and consensus estimate of $14.6 million. As of 2Q, 237 cumulative patients received Procysbi compared to 199 patients in March and 169 patients in December. Ten percent of revenues came from new scripts and 90% from refills. Sixty-four percent of scripts were from new prescribers. Compliance remained ahead of company expectations and was seen as a major driver for the strong quarter. The company launched the drug in Germany in April and has experienced strong demand there. The company intends to eventually launch the drug in other EU countries such as the Nordic countries and Austria as soon as they are comfortable with the Germany launch. Management upped 2014 Procysbi sales guidance to $65 million to $70 million, which is in line with our $67.2 million estimate (consensus $64.3 million). We believe the revenue guidance remains attainable.”

Lee continued, “Procysbi data was recently published in the Journal of Pediatrics, which could be used for label expansion. RPTP could file for expansion in 2H with a potential approval by mid:15. As for the Huntington’s program, the company expects to meet with the FDA in July and with the EMA later in the summer to discuss the regulatory pathway. We continue to believe that management will consider filing for approval based on the Phase II data set given the unmet medical need but note that US approval may be challenging based on a Phase II study that was conducted in a single ex-US country with a few clinical sites. In NASH, the Phase II study overenrolled patients and data is expected in 1H15. In Leigh Syndrome, enrollment has been slower-than-anticipated in the Phase IIb study, so it remains to be seen whether the company can report interim results by year-end.” Lee added, “We suggest buying shares of RPTP on any weakness as we continue to expect a robust launch.”

According to TipRanks.com, which measures analysts’ and bloggers’ success rate based on how their calls perform, analyst Kimberly Lee has a total average return of 4.3% and a 51.9% success rate. Lee has a 2.3% average return when recommending RPTP, and is ranked #1271 out of 3219 analysts. 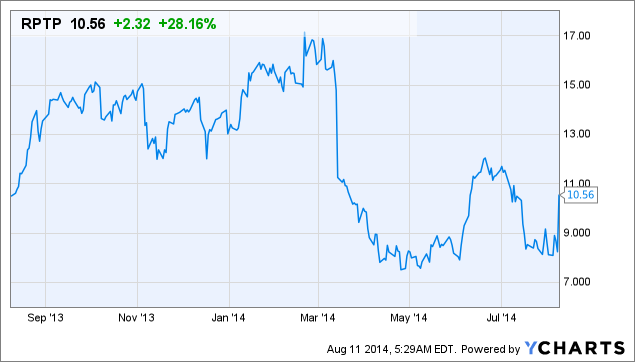