RadioShack Cost Cuts Way Too Late To Save Them, Says Wedbush

Pachter commented: “RadioShack is late to the party in focusing on reducing costs, including a substantial reduction in marketing spend and store closures. Negotiations with creditors remain at an impasse, preventing the company from pursuing its initially announced plan of closing up to 1,100 stores, but the company has focused on controllable cost reduction, reducing store operations and regional management expenses by $100 million, corporate expenses by $21 million, marketing expenses by $105 million, professional fees by $41 million, in-store expenses and other overhead by $28 million and accelerating store closures (despite strong resistance from creditors), which management expects to contribute another $90 million.”

The analyst concluded, “Reiterating our UNDERPERFORM rating and 12-month price target of $0 as declining CE sales and continued margin erosion will likely compel the company to enter bankruptcy in order to pursue its turnaround. Our price target reflects our expectation that creditors will force a reorganization and wipe out RadioShack’s equity.” 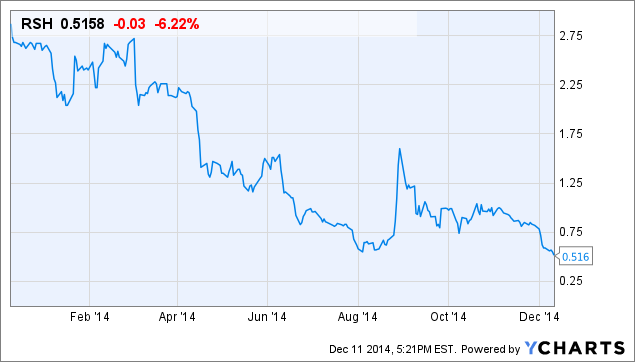