Quintiles Transational: We Reiterate Our Outperform Rating On The Stock Given The Upside Potential From IHS, Says William Blair

Kreger noted, “Surprisingly, the meeting was not particularly well attended, providing another indication that investor interest in clinical CROs has waned somewhat of late. Management commentary at the event was upbeat and quite impressive. Quintiles is clearly the leader in pharmaceutical outsourcing and is using this scale advantage to aggressively invest in technology and data analytics. We believe these relatively new tools hold encouraging potential to make drug development more efficient for clients and potentially more profitable for CROs. Management reiterated 2014 guidance and noted a longer-term objective to outpace the industry’s growth, which it pegs at 6%-8%. Combined with margin gains in IHS and capital deployment, we remain comfortable that the company can generate low- to midteens EPS growth over the next three years.”

Kreger added, “Our key conclusion from the meeting was growing momentum in the underappreciated IHS segment. The real world evidence (RWE)/pharmacovigilance portion of this business has the best growth across the entire company at present. The IHS segment has an EBIT margin of only 4.6% currently, and thus generates only 7% of the company’s income on 25% of the revenue base. But we believe this business can become much more profitable over time. We forecast IHS EBIT margin to expand by 200 basis points during the next two to three years. With growth now building across higher margin areas of IHS (such as RWE), we believe margin gains could be much higher than our model, with potential to reach the double digits longer term (management has endorsed a high-single-digit target in the next few years). We calculate that a 300-basis-point boost in IHS margins would translate into 18 cents in added EPS—a 6% lift to our 2015 target. We forecast IHS revenue to grow 7%-8% over the next two years versus the 15% generated in the second quarter, although even a 5-percentage-point lift in revenue growth in IHS translates to only a 1 cent EPS boost given the low margins today. We are not changing our estimates on Quintiles after Friday’s meeting but reiterate our Outperform rating on the stock given the upside potential from IHS.”

According to TipRanks.com, which measures analysts’ and bloggers’ success rate based on how their calls perform, analyst John Kreger has a total average return of 10.8% and an 80% success rate. Kreger is ranked #1256 out of 3274 analysts. 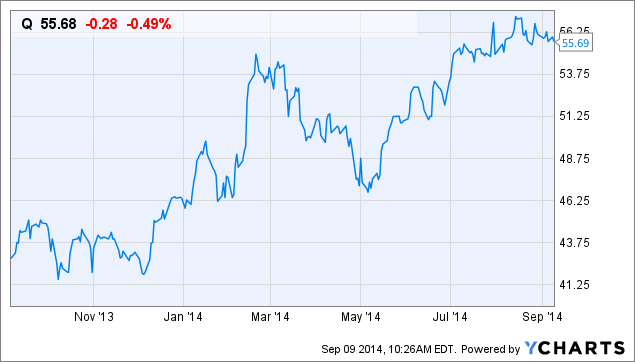