Walkley wrote, “Based on our analysis, industry conversations, and recent teardown reports, we believe Qorvo may have increased its RF $-content growth in the recently launched iPhone 6S/6S Plus devices by roughly 10% versus the iPhone 6/6 Plus models and remains a key RF supplier into these devices.”

“Given its strong RF $-content in the new iPhones that are basically consistent with our expectations, we believe Qorvo’s September and December quarters are tracking well versus our estimates. We believe Qorvo has a broad RFIC portfolio for the mobile device market and is well positioned to benefit from strong secular RFIC TAM growth trends. Further, we believe Qorvo has an industry-leading non-handset related RFIC portfolio addressing the higher-margin defense & aerospace and networks infrastructure markets,” the analyst continued.

Walkley concluded, “Given our expectations for high-tier smartphone market share shifts continuing during Q4/C2015 and C2016 and our expectations Qorvo’s increased content sales into Apple’s iPhone 6S upgrade cycle, we believe Qorvo’s near-term trends are tracking well versus our estimates.”

Out of the 12 analysts polled by TipRanks, 11 rate Qorvo stock a Buy, while 1 rates the stock a Hold. With a return potential of 66.2%, the stock’s consensus target price stands at $81.20. 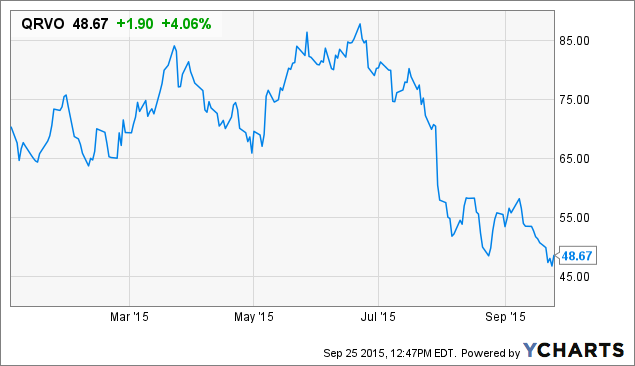