Piper Jaffray analyst Joshua Schimmer weighed in today with his opinions on Uniqure NV (NASDAQ:QURE) after the company released its first quarter earnings and updated the timing of key pipeline programs. Schimmer reiterated an Overweight rating on the stock with a price target of $40.00. Shares of QURE are currently trading at $30.25, up $0.19, or 0.63%.

Schimmer observed, “We continue to believe 2015 will mark an important inflection point for QURE as the company is expected to report initial clinical data from its hemophilia B gene therapy program as well as Sanfilippo B in 2H 2015. The company ended the quarter with cash and cash equivalents of €43.2 M, but subsequent to quarter end raised an additional net €77.9 M in a follow-on in April and received a $50 M upfront payment and $38 M equity investment from BMS following the collaboration agreement.”

All the 6 analysts polled by TipRanks rate uniQure N.V. stock a Buy. With a return potential of 44.2%, the stock’s consensus target price stands at $42.60. 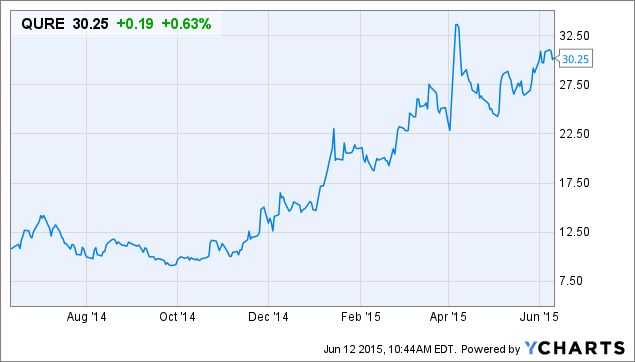