The WSJ has reported this week that Apple Inc. (NASDAQ:AAPL) is preparing to launch a direct rival to Spotify AB and other popular services that let users stream songs instead of buy them. The tech giant will unveil the music streaming service at its World Wide Developers Conference in San Francisco next week. Piper Jaffray analyst Gene Munster expects Beats Music to be the backbone with the service branded Apple and integrated into iTunes. The WSJ had previously reported that Beats had ~300k paying subscribers vs. Spotify at 15 million. The analyst rates Apple shares an Overweight with a price target of $162, which represents a potential upside of 24% from where the stock is currently trading.

The analyst wrote, “With the $10 per month expected price for the new streaming service, even if Apple were to grow its paying streaming music subscriber base to match Spotify’s 15 million (which we view as highly unlikely), it would add less than 1% to revenue in 2016. In other words, an Apple music streaming will benefit the iPhone user experience, but not benefit the company in any meaningful way financially.”

Munster further commented, “While it is easy to dismiss the impact of music streaming on Apple’s financial model, we believe there is a bigger theme in play with the company slowly adding revenue streams on top of its hardware dominance. The most obvious example is Apple Pay, which we believe will add new features over the next two years, including peerto-peer money sharing.” 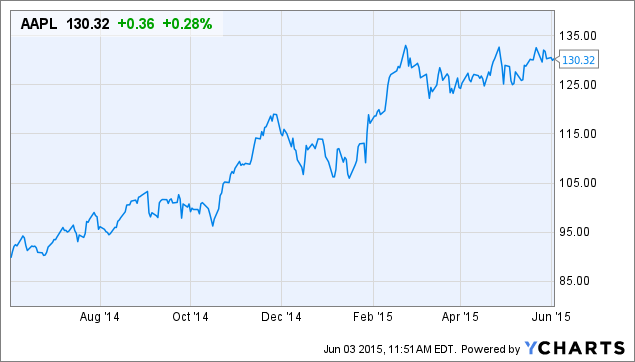