Piper Jaffray: There Is Greater Than 50% Chance That Yelp Inc (YELP) Will Be Sold

Piper Jaffray analyst Gene Munster weighed in with a few insights on Yelp Inc. (NYSE:YELP), after the Wall Street Journal reported that Yelp could be sold for “more than a $3.5b”, which implies $49+/share. The company’s shares jumped 24% after the news broke yesterday. The stock is currently trading nearly 5% up.

In his research note, Munster commented: The article did not mention who the potential acquirers could be, but we believe the most logical buyers would be Google, Facebook and Apple as they all would benefit from further traction in the local advertising space, have ample capital to consummate a sale, and would experience technology infrastructure synergies.”

Furthermore, “We believe there is a greater than 50% chance that this deal happens and note the article indicates that the deal is not imminent, which implies valuation discussion are likely in their infancy. We note that while last quarter’s financials were choppy, growth in the number of reviews accelerated, indicating a solid core business.”

The analyst rates YELP an Overweight with a price target of $70, which implies an upside of nearly 41% from current levels. 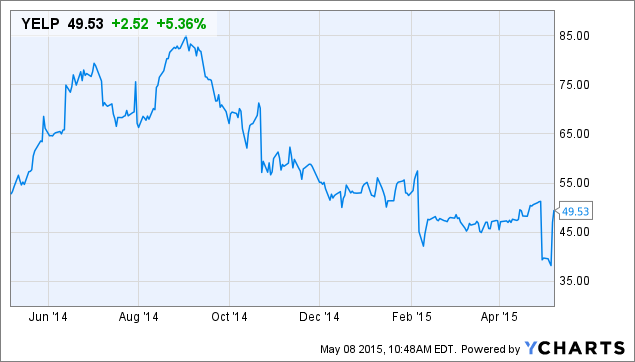