Piper Jaffray analyst Erinn Murphy weighed in today with a research report on GoPro Inc (NASDAQ:GPRO), reiterating an Overweight rating on the stock with a price target of $66. The report was in response to an announcement made by CEO Nick Woodman at the Code Conference yesterday, regarding the company’s decision to extend its product line into drones and VR. This, in turn, will expand GoPro’s TAM, giving the company ample opportunity to grow.

Murphy noted, “First, GoPro plans to launch an array that combines six action cameras to capture spherical content. This product should be available in 2H 2015 and will be priced in the DSLR class ($500-$1,500). Second, the company will unveil its own aerial quadcopter mount in the 1H of 2016. We expect pricing to be similar to that of DJI and Parrot drones ($500-$2,500).,

Furthermore, “Based on industry estimates, the civilian drone market is on pace to be close to $2B TY and in excess of $5B by 2020–GoPro could accelerate this given its brand leadership and unrivaled distribution. In his Virtual Reality (VR) Primer published yesterday, Piper Jaffray Sr. Analyst Gene Munster estimates VR to be a >$65B market by 2025.” 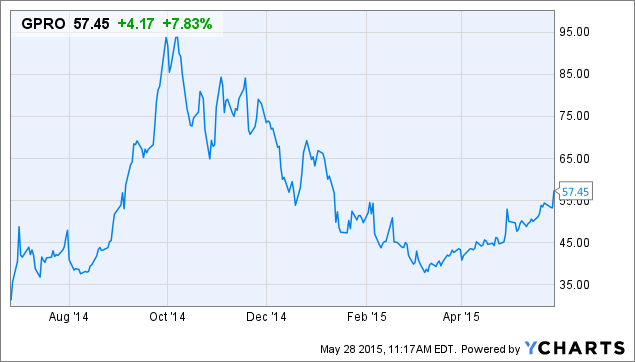