Analyst Gene Munster of Piper Jaffray weighed in today with a few insights on eBay Inc (NASDAQ:EBAY), reiterating an Underweight rating on the stock with a price target of $50.00, which implies a downside of 21% from current levels.

The report was issued in response to the announcements and media rumors over the past couple of weeks which suggest that PayPal, Google and Apple are all continuing to expand functionality of mobile payment, for both physical and online retail. Paypal will, in turn, face potential competition it may not have dealt with before, giving EBAY’s spin-off a good chance of success.

Munster observed, “We believe that by the end of 2016 50% of PayPal’s payments will be done on mobile, meaning that a large base of PayPal’s existing business will be facing the potential for competition where it hadn’t in the past. We expect investor optimism on the EBAY story to continue to rise going into the PayPal spin-off this fall, then decline post spin.”

The analyst also noted, “When Apple Pay and Android Pay are fully integrated into web browsers, we expect significant headwinds to PayPal’s checkout use. As we approach the PayPal spin off we believe that post-spin investors will become increasingly concerned about this looming threat and eBay’s multiple will compress.”

Out of the 14 analysts polled by TipRanks, 5 rate Ebay stock a Buy, 9 rate the stock a Hold, and 1 recommends Sell. With a downside potential of -0.39%, the stock’s consensus target price stands at $61.46. 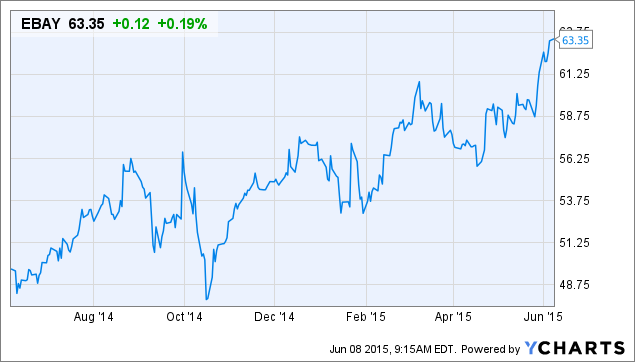