Piper Jaffray analyst Gene Munster came out today with an optimistic view on Apple Inc.’s (NASDAQ:AAPL) Watch, following the company’s much-anticipated Spring event in San Francisco. The event shed light on the Apple Watch, with pre-orders starting on April 10 and availability on April 24. In addition, Apple unveiled a new MacBook, cut the price of Apple TV, and announced a partnership with HBO NOW.

The analyst reiterated AAPL an Overweight with a price target of $160, which represents a potential upside of 27% from where the stock is currently trading.

Munster noted, “We believe some investors may have missed the killer feature of the Apple Watch: the design. We believe that the Apple Watch is the first Apple product with design as the lead feature and technology as a supporting feature and believe this makes sense because the Apple Watch competes against other traditional watches, not other smartwatches. Overall, we remain conservative in our thinking for CY15 numbers as the company continues to iterate and build demand over the next year plus. We continue to believe the breakout quarter for the Watch will be Dec-16. Finally, we are adjusting our ASP expectations to $550 vs. our prior $500 given higher pricing in the mid/highend than previously expected.” 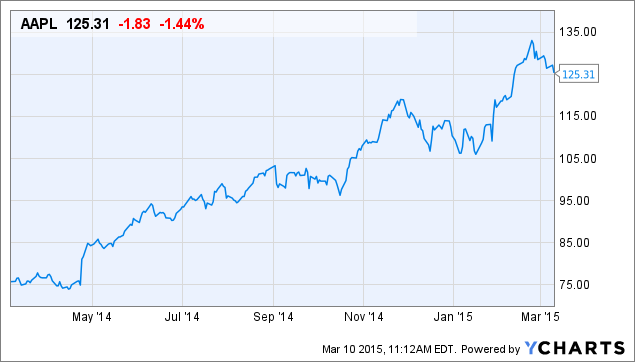