ISIS Pharmaceuticals, Inc. (NYSE:ISIS) has been reiterated as a Neutral at Piper Jaffray by research analyst Joshua Schimmer in a recent report released today. The analyst maintained a price target of $68 per share, representing an upside of about 17% over the closing stock price. The sell-side report follows the company’s first-quarter earnings results, which were released this morning.

Schimmer noted, “The highlight of the call was the partnership with Bayer on ISIS-FXIrx (anti-clotting program with Bayer), which was announced yesterday. The late-stage programs, SMNrx, APOCIIIrx, and TTRrx are generally on track with data readouts expected by 2017-2018. ISIS’s partner, GSK, is advancing the TTRrx program into P3 for cardiomyopathy and plans to run a separate P3 trial in Japan in FAP pts this year. The company plans to provide an update on its lipid subsidiary, Akcea, through a webcast in June.”

“While we were encouraged by the ISIS-FXIrx deal, it was largely expected and already factored into our valuation. As such, we remain on the sidelines until gaining further visibility on development of APOCIIIrx for broader TG indication and new value drivers as new programs enter the clinic.”, the analyst added. 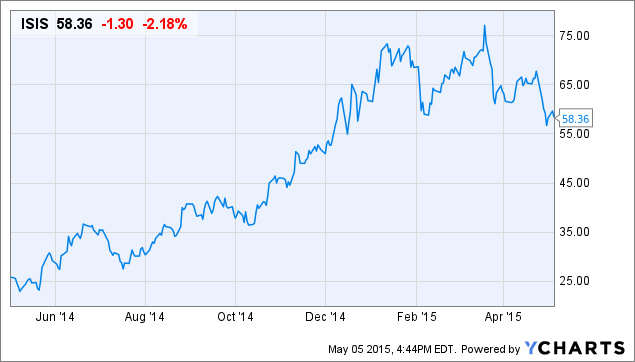