Piper Jaffray analyst Joshua Schimmer came out with a research report on ISIS Pharmaceuticals, Inc. (NASDAQ:ISIS) following the company’s encouraging update from the ongoing Phase 2 OL trial of ISIS-SMNRx, a drug to treat children with spinal muscular atrophy. The analyst reiterated a Neutral rating on the stock with a price target of $68.00. Shares of ISIS closed yesterday at $68.00, up $1.40, or 2.10%.

Schimmer observed, “The data, as of April, continues to be very encouraging as only one patient met the event criteria (permanent ventilation or death) since the prior program update back in October. While certainly promising, it’s still difficult to interpret without a control arm. The sham-controlled Phase 3 program in collaboration with Biogen continues to enroll and data is expected 2016/2017.”

Moreover, “Gene therapy is also being pursued in infantile SMA and we expect initial clinical data later this month. In contrast to ISIS, this approach utilizes a transgene coding for SMN and systemic IV administration, although there may be some CSF penetrance given the CNS tropism of AAV9. With two SMA datasets this month, we expect a lot of discussion comparing the trials, but note that interpretation will likely be complicated with the datasets at different time points as well as a lack of control arms.

Out of the 9 analysts polled by TipRanks, 5 rate Isis Pharmaceuticals stock a Buy, while 4 rate the stock a Hold. With a return potential of -12.5%, the stock’s consensus target price stands at $59.50. 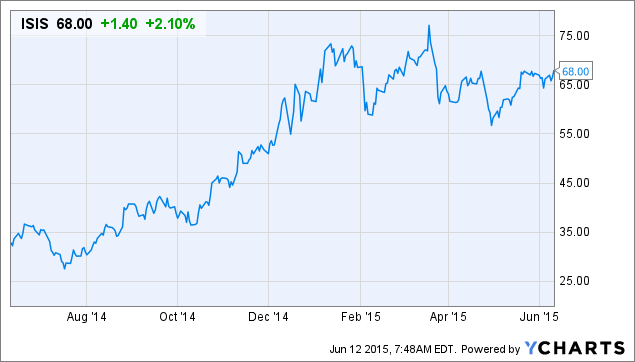