GoPro Inc (NASDAQ:GPRO) received another set of praises from analysts at Piper Jaffray in a research note released today. The research team, led by analyst Erinn Murphy, maintained an Overweight rating on the stock with a $55 price target, which represents a potential upside of 23% from where the stock is currently trading. The analyst believes GPRO is an undervalued, high-growth consumer brand with an opportunity to meaningfully expand its market share with time. She believes the company can at least double its unit sales (from 5.2M to 10M) over time.

Murphy noted, “From a thesis perspective, this is a relevant consumer brand benefiting from early stage of customer adoption through accelerating product sales of capture devices within a broader eco-system that is capitalizing on experiences. As evidenced by our Teen Survey, teens are spending more time on social networks laden with visual content–be it Instagram or Snapchat. From a valuation perspective shares are trading at 0.9x PEG vs. our global brand group of 1.4x and high-growth brands like UA at 1.8x.”

The analyst further commented, “We believe sales and margins can best Street estimates for Q1. We are modeling Q1 sales and EPS essentially in line with the Street at $341M (+45%Y/Y) and $0.17 (Street: $0.18) but are looking for outperformance in Q1. Relative to consensus, our 2H estimates are higher driven by: 1) stronger than expected upgrade cycle success; 2) distribution expansion and continued sell through momentum in Europe & Asia and 3) ongoing strength of the $130 HERO as the consumer market for action cameras broadens.” 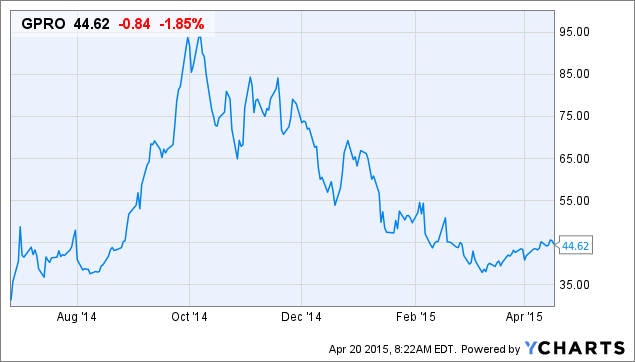