In a research report issued Monday, Piper Jaffray analyst Joshua Schimmer reiterated a Neutral rating on ISIS Pharmaceuticals, Inc. (NASDAQ:ISIS) with a $68 price target, after the company reported its fourth-quarter results on Friday and outlined plans for 2015.

Schimmer wrote, “The pipeline continues to broaden with new targets, but there is now a multiplier effect from introducing Licaconjugate and 2.5 generation candidates simultaneously which makes it harder than ever to keep track of what’s what. ISIS now has ~12 employees/candidate, which to us continues to reflect the company’s strategy of throwing as much science as they can against the wall without maximizing value for any individual program. We will get incremental datapoints from the pipeline over the course of the year, as well as important updates for competitive SMA programs (small molecule and gene therapy). We’re on the sidelines until we find a new value-driver for which ISIS decides to retain adequate economics and until the story stabilizes.”

According to TipRanks.com, which measures analysts’ and bloggers’ success rate based on how their calls perform, analyst ISIS has a total average return of 19.0% and a 69.2% success rate. Schimmer has a 93.3% average return when recommending ISIS, and is ranked #206 out of 3492 analysts. 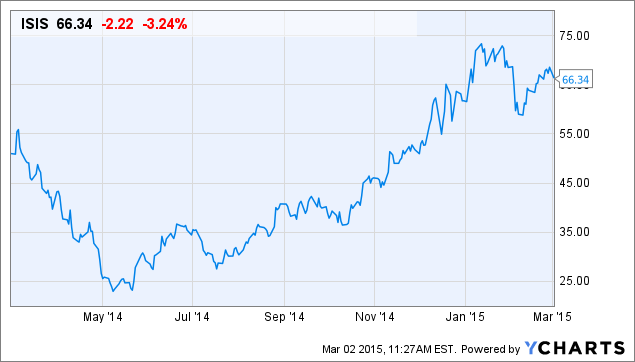