In a research report released this morning, Piper Jaffray analyst Joshua Schimmer reiterated a Neutral rating on shares of MannKind Corporation (NASDAQ:MNKD) with a price target of $3.50, which represents a potential downside of 16.5% from where the stock is currently trading.

According to Schimmer, reported sales by Sanofi have been lackluster to say the least and IMS scripts still don’t show signs of life. Without an inflection point in the coming months, the analyst thinks there is a danger that Sanofi will return the product to MNKD, which could force a full divestiture to avoid insolvency.

Schimmer wrote, “IMS scripts show little momentum so far, and we believe MNKD must be getting nervous that the product’s potential may never be realized. While we like the profile of Afrezza given its unique PK profile, we’ve also highlighted the fact that the diabetes market poses considerable challenges, which may be insurmountable for even good products. Without an inflection in prescriptions, it’s possible that SNY returns the product in early 2016, which would saddle MNKD with an incremental cash burn that would likely necessitate divestiture (or withdrawal) of the product to avoid insolvency.”

However, the analyst believes that there is still hope for the Technosphere platform, noting, “MNKD is actively identifying a new direction for its proprietary Technosphere inhaled drug delivery platform. Potential applications the company is considering include pain management (migraine or breakthrough cancer pain), pulmonary hypertension, cystic fibrosis, nicotine replacement and epilepsy.”

Bottom line: “We are lowering our Afrezza penetration estimates but also lowering our spending assumptions and correcting an error which ignored the Sanofi Loan Facility, which meant $175M of losses under the JV wouldn’t have to be repaid until a later date. That said, if IMS trends don’t improve, even our revised estimates may be too optimistic.”

Out of the 9 analysts polled by TipRanks, 4 rate MannKind Corporation stock a Buy, 3 rate the stock a Hold and 2 recommend Sell. With a return potential of 102.1%, the stock’s consensus target price stands at $8.47. 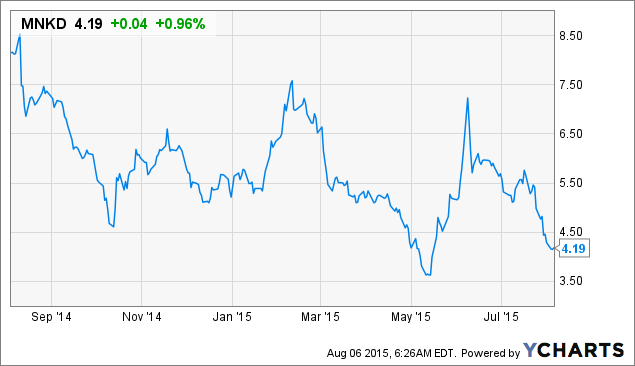