In a research report released today, Piper Jaffray analyst Joshua Schimmer reiterated a Neutral rating on shares of MannKind Corporation (NASDAQ:MNKD) and raised the price target to $4.00 (from $3.50), which represents a slight downside potential from current levels. The increased price target comes in response to lower spending on Afrezza in the second-quarter.

Schimmer explained, “Spending on Afrezza was lighter than we projected; we also expect the company to manage its own spending levels prudently and believe it has a fair amount of cushion in its spending, particularly in its “professional and other expenses” which are costing nearly $20M/yr.”

Furthermore, “MNKD reported 2Q15 results this morning, and while the Afrezza launch has been slow, the company remains optimistic that measures to improve access will lead to an acceleration of uptake. Although SNY did not provide Afrezza commentary on their own quarterly earnings call, MNKD notes they remain an active and engaged partner, with the joint committee approving additional resources for the ongoing commercialization effort.”

Bottom line: “We still have concerns with the Afrezza trajectory and MNKD’s financial position; if there is not an inflection of prescriptions in the coming months, MNKD may need to re-evaluate its strategy.”

Out of the 9 analysts polled by TipRanks, 4 rate MannKind Corporation stock a Buy, 3 rate the stock a Hold and 2 recommend Sell. With a return potential of 107.6%, the stock’s consensus target price stands at $8.47. 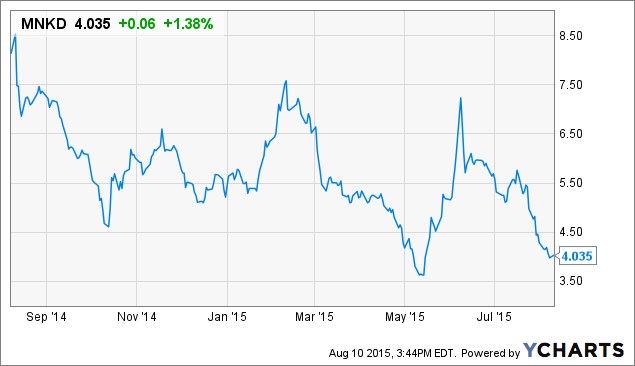