Piper Jaffray analyst Joshua Schimmer was out pounding the table on Inotek Pharmaceuticals Corp (NASDAQ:ITEK) Tuesday, reiterating an Overweight rating and raising the price target from $9 to $29, which implies an upside of 73.0% from current levels.

Schimmer wrote, “As we pass the midway point of 2H15, we are refreshing our thinking on our coverage universe. ITEK recently garnered considerable investor interest when it announced the FDA had agreed upon a placebo controlled P3 trial design for its glaucoma drug, trabodenoson. We had highlighted this as a possibility and were pleased to see the FDA agree to this. This favorable update helps derisk ITEK by providing what may be a lower bar for efficacy in P3 by providing a differentiated commercial message as one of the few products to beat a placebo in a controlled trial, and by establishing a higher price point so future capital raises should be less dilutive than they would have been.”

“We are revising our assumptions, lowering our discount rate from 11% to 10.5% and lowering the amount of share dilution. As a result, we increase our PT from prior $9/share to a new $29/share. Our 5.5% terminal growth assumption is unchanged.”, the analyst added. 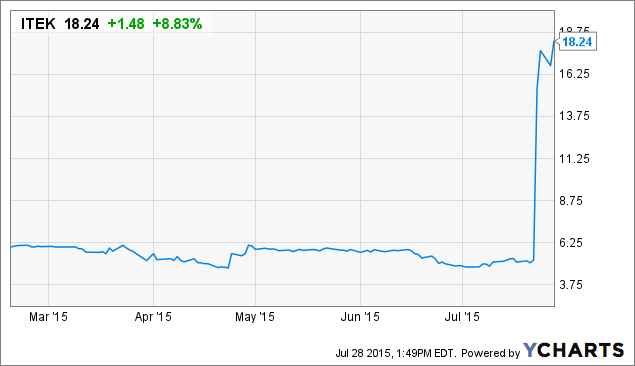