Piper Jaffray analyst Joshua Schimmer was out pounding the table on Incyte Corporation (NASDAQ:INCY) Friday, reiterating an Overweight rating on the stock and raising the price target to $130 (from $121), which represents a potential upside of 18% from where the stock is currently trading.

Schimmer wrote, “As we pass the midway point of 2015, we’re refreshing our thinking on our coverage universe. For INCY, the company is in a transition from an one-hit wonder (Jakafi launch) to a major oncology player with an increasingly attractive and diversified pipeline. We are approaching some binary events (e.g. JANUS 1 Jakafi readouts in pancreatic cancer and IDO + PD-1/PD-L1 data in 2016).”

Furthermore, “The company’s PI3K delta/ JAK inhibitor regimen has shown some early but strong data in B-cell malignancies, particuarly in Hodgkin’s lymphoma. As a result, we are adding this product to our model starting in 2019 and concomitantly lowering our terminal growth rate from 6% to 5% to reflect our increasing confidence in the pipeline, which results in a PT increase to $130.”

Out of the 9 analysts polled by TipRanks, 8 rate Incyte stock a Buy, whereas only one rated the stock a Hold. With an upside potential of 6.71%, the stock’s consensus target price stands at $117.20. 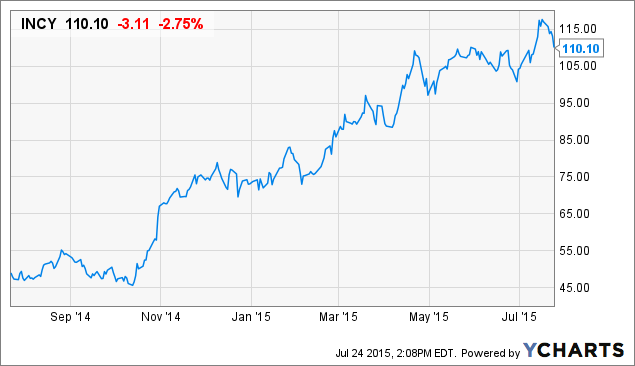