In a research report released today, Piper Jaffray analyst Gene Munster maintained an Overweight rating on SINA Corp (NASDAQ:SINA) with a price target of $49, after the company released fourth-quarter earnings. Shares of Sina closed yesterday at $36.20, down $0.30 or 0.82 percent.

Munster noted that the report slightly beat Street guidance, but Sina’s “core portal business being challenged did not improve in Q4 and management commentary points to a continued long-term turnaround effort for the portal.” Although Munster believes the “difficulties at the core” may be a turn off for some investors, he continues to be bullish on the stock.

Munster believes that SINA is being negatively impacted by video offerings and mobile and notes that SINA management “seems to expect the portal headwinds to continue over the next year or more.” Additionally, SINA is beginning to implement its vertical content initiatives. However, this will likely result in short-term investment costs and it will take time to see “meaningful monetization” from the initiatives.

The analyst concluded, “We continue to believe that based on our sum-of-the-parts, there is a clear value story for shares of SINA and we maintain our Overweight on that basis. As we have seen with a similar story, YHOO, the difficulties at the core may mask the overall value in shares for some investors who can’t get past the declining core. Given management commentary, it appears the core will continue to be a drag over the next year, but we believe it could mask the inherent opportunity in shares.” 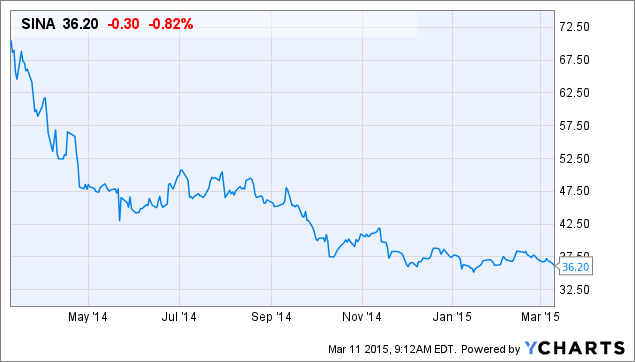