In a research report published Monday, Piper Jaffray analyst Joshua Schimmer maintained an Overweight rating on Insmed Incorporated (NASDAQ:INSM) with a $51 price target, as the company will host an analyst event in NYC tomorrow to review its clinical stage programs.

Schimmer noted, "We see this as a useful opportunity to meet more of the INSM development and commercialization teams, as these are groups who will play an increasingly important role as the company's pipeline advances and as Arikayce approaches EU commercialization. Among this group is the new CMO/CSO, Eugene Sullivan who should have unique insights into the company's emerging inhaled treprostinil program for PAH."

Furthermore, "INSM will likely provide additional context into the confirmatory Study 212 evaluating Arikayce for NTM infection. The company hopes to complete enrollment by YE, but is unlikely to have visibility into that specific timing until closer to mid-year. We'll be listening for granularity on design assumptions and hope to have an introduction to some of the INSM team-members who are planning for commercial launch in Europe. The MAA filing was submitted in February, and 120d questions will be available at the end of June, 2015." 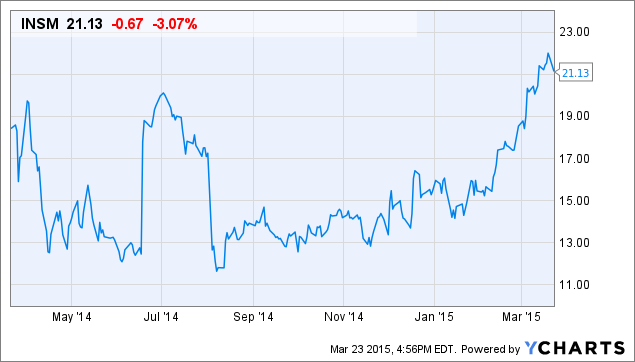