Piper Jaffray’s healthcare analyst Joshua Schimmer weighed in today with a few insights on Pharmacyclics, Inc. (NASDAQ:PCYC), following the release of the company’s fourth-quarter results, posting GAAP net income of $63 million, compared to $64 million for the year ago quarter. The analyst raised the price target to $184 (from $134), while maintaining a Neutral rating on the stock.

Schimmer wrote, “PCYC reported another solid performance for Imbruvica, coming in at $185M in the U.S., ahead of our $183ME and bolstered by $100M in milestone payments which we hadn’t included in our model which drove a strong EPS of $0.81 GAAP and $0.96 nonGAAP. Imbruvica continues to advance rapidly in liquid tumors and PCYC is beginning to explore its role in solid tumors as well and extending its franchise into inflammatory disorders. We still see Imbruvica as one of the most exciting new products in biotech, but continue to struggle with a precise sense of valuation considering we lack visibility into the long-term share of the B-cell malignancy market given so many moving parts.”

However, “We’re resigned to missing near-term PCYC strength based on upside to consensus estimates, which seems apparent to us still and are stuck in a bit of a ‘damned if you do’ scenario. Our biggest concern remains that new combination data will emerge showing deep remissions in these B-cell disorders driven by the effective combination of Imbruvica with other targeted therapies or chemo regimens. Specialists with whom we have spoken have all expressed interest in long-term drug holidays given potential for these deep remissions. As well, as the field evolves with other programs (Bcl2 inhibitors, CAR-T, other BTK inhibitors), there’s always the chance that a new combo emerges to potentially challenge Imbruvica.” 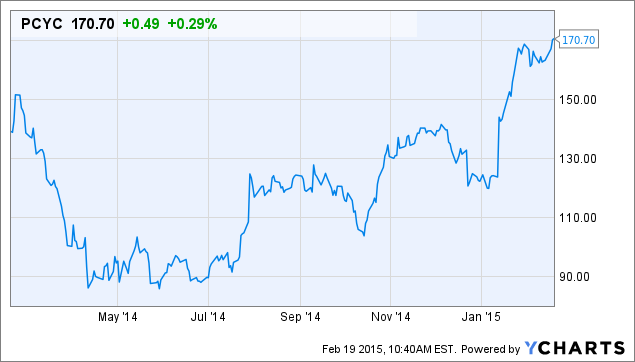