Ahead of the bell, LinkedIn Corp (NYSE:LNKD) dropped 18.50% after the company reported weak outlook for the quarter ahead that is falling well short of analyst expectations. Adding insult to injury, Piper Jaffray analyst Gene Munster came out today with a research report on LNKD, reducing the price target from $297 to $246, while keeping an Overweight rating on the stock.

The analyst noted, “LinkedIn reported Mar-15 essentially inline with the Street, but guided down 2015 adjusted EBITDA by 23% to invest in growth. Revenue guidance for 2015 excluding FX was about 1% below the Street, with FX adding an additional ~3% headwind. While investors have been typically applauding increased spending from social leaders (i.e., Facebook), investors were caught of guard with the outlook, and reminded of the roller coaster ride in owning shares of LNKD which sent shares down 20% in the aftermarket.”

However, “We believe the surprise of the investment will quickly fade, and investors will return to owning LNKD given the spending is likely the right move long term. Reiterating Overweight but lowering price target to $246 from $297 to reflected lowered EBITDA.” 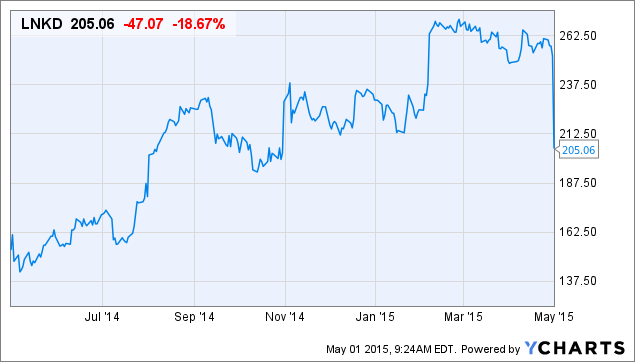