In a research report sent to investors on Thursday, Roth Capital analyst Joseph Pantginis maintained a Buy rating on Peregrine Pharma (NASDAQ:PPHM) with a $5 price target, which represents a potential upside of 220% from where the stock is currently trading. The reports follows the company’s presentation of new data from an ongoing Phase Ib IST of bavituximab in combination with chemotherapy in chemo-naive stage IV NSCLC patients.

Pantginis wrote, “We believe this is important progress with regards to bavituximab’s development in an earlier stage of NSCLC. Naive Stage IIIb and IV NSCLC patients eventually have recurring disease and poor prognosis. The data achieved in this trial show it is consistent or better compared with historical data when treating the same population with chemotherapy alone, particularly when comparing OS. While the numbers are small in this study and lack a comparative arm, we view these data as positive and support continued investigation of bavituximab in the frontline setting complementing the drug’s development in the ongoing SUNRISE Phase III trial (2nd-line patients).”

The analyst concluded, “With Peregrine being a pivotal stage company, we view the risk/reward profile as favorable, and we believe visibility from the broadening bavituximab profile and partnering potential should drive the stock in 2014.” 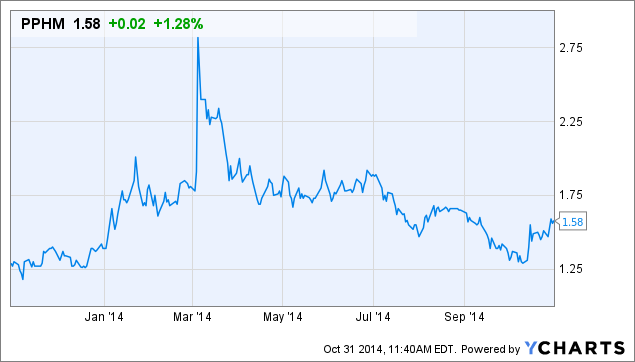