William Blair analyst Ralph Schackart came out with an update on Pandora Media Inc (NYSE:P), after hosting investor meetings in the Midwest with Pandora’s Vice President of Corporate Finance and Investor Relations Dominic Paschel. The analyst reiterated an Outperform rating on Pandora shares, while no price target was provided.

Schackart stated, “In our view, the key point from our meetings is that investor focus is beginning to shift away from the upcoming decision on the admissibility of the Merlin deal (September 18) and the CRB rate decision (expected in December) to opportunities in 2016 and beyond.”

Furthermore, “We believe 2016 will be a pivotal year for Pandora during which it can potentially negotiate direct deals with the major labels, which could allow the company to expand internationally more rapidly and grow its user base at a faster rate. Further, Pandora’s maturing local salesforce and new products (such as the sponsored listening ad unit) should allow it to continue to increase monetization. Although it cannot predict the CRB ruling, management seems confident it is ready to focus on 2016 monetization, user growth, and listener hours growth once the royalty rates are set in December.”

The analyst concluded, “Management’s tone was positive, and the conversations focused on the increased opportunity to negotiate direct deals after the CRB’s decision in December. We believe this could lead to international expansion and new product offerings.”

Out of the 31 analysts polled by TipRanks, 21 rate Pandora Media stock a Buy, 9 rate the stock a Hold whereas only one rated it a Sell. With a return potential of 15%, the stock’s consensus target price stands at $22.59. 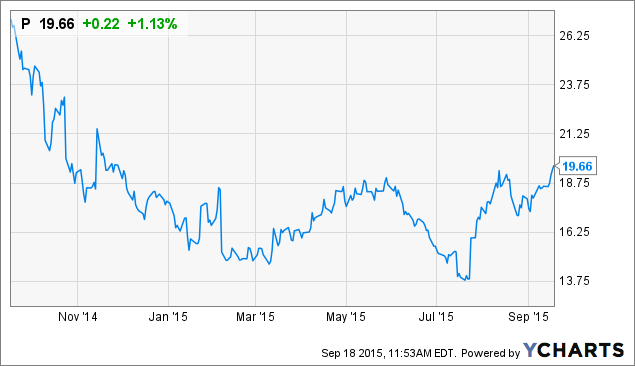