Moussatos wrote, “Apparently, there has been significant fine tuning of the process and the company believes that even with expansion of manufacturing to Patheon, they plan to have a Pacira employee onsite who will be the only one who will have complete proprietary knowledge in order to protect the Trade Secrets associated with the specifics of the new spray manufacturing process in Suite C as well as the future Suites at Patheon. We also asked the head of manufacturing about incentives to keep the team at Pacira and were told that they are staying put because they were able to get in on the ground floor of EXPAREL manufacturing and consider the process to be their creation. Along with an excellent management team running the company (and stock options don’t hurt), the EXPAREL manufacturing team feels that they are in an ideal situation. It is our understanding that none of the manufacturing team has left Pacira. Consequently, without the loss of the manufacturing team, we believe a generic EXPAREL is unlikely for the foreseeable future “

Moussatos continued, “The FDA Orange Book lists two patents covering EXPAREL. The original DepoFoam manufacturing patent (US 6,132,766) expired November 16, 2013 and the EXPAREL patent expires September 18, 2018 (US 8,182,835). Management has previously commented that due to trade secrets covering the inherently difficult manufacturing process, they do not anticipate a generic EXPAREL will be launched shortly after the expiration of US 8,182,835 (if at all). Trade Secrets pertaining to equipment customization, aspect ratios, mixing speeds, and particle sizes during processing, mixer head geometries, heights, speed and total mixing time are just some of the important variables as the multivesicular liposome structure of DepoFoam is complicated. The manufacturing process involves two emulsification steps, solvent removal, diafiltration/concentration, aseptic potency adjustment, vial filling, and visual inspection. The company continues to reiterate their estimation that it would take 7-8 years and a $100 million investment to replicate the manufacturing process. Recall that the EXPAREL manufacturing capacity in San Diego is about $400 million ($100 million with Suite A and $300 million with Suite C) and Patheon’s Suite A2 will mirror Suite C in San Diego, (providing an additional $300 million) and is expected to be ready in H2 2016. In addition, Patheon has additional room to increase capacity for long-term growth.” 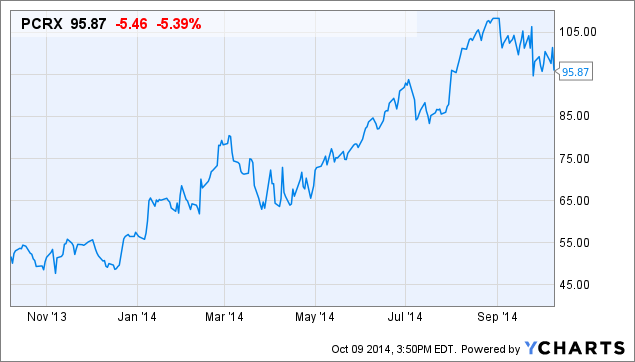