In a research note released yesterday, Canaccord analyst Richard Davis reiterated a Buy rating on shares of Oracle Corporation (ORCL) and a price target of $48.00, following an analyst briefing at Oracle’s headquarters.

David Commentes: “We expect ORCL shares to gradually grind higher as investors recognize and acknowledge that the firm is becoming more competitive in the transition to cloud computing. In a trendless tape, Oracle, a company that generates substantial, old fashioned, operating cash flow margins near 40%, looks to us to be an above average choice for large cap investors looking for a relatively conservative investment”.

The analyst continues, “Investors overindulged on fast growing money losers last year, so the outperformance of profitable firms is refreshing, and it should serve as a wake-up call to management teams that they better have a cogent path to profitability if they want their stock prices to appreciate. Meanwhile, we believe the 5% sell-off last week in ORCL shares was an overreaction to frustration that the company did not beat numbers in a presumably easy comparison and seasonally strong quarter. Finally, in a choppy, or even modestly correcting market, ORCL’s low valuation makes it likely to outperform at least until or if we get a momentum rally in Q4”.

According to TipRanks, which measures analysts and bloggers success rate based on how their calls perform, analyst Richard Davis currently has an average return of 7.1% and a 59% success rate. Davis has a 2.4% average profit recommending ORCL, and he is ranked #323 out of 3133 analysts. 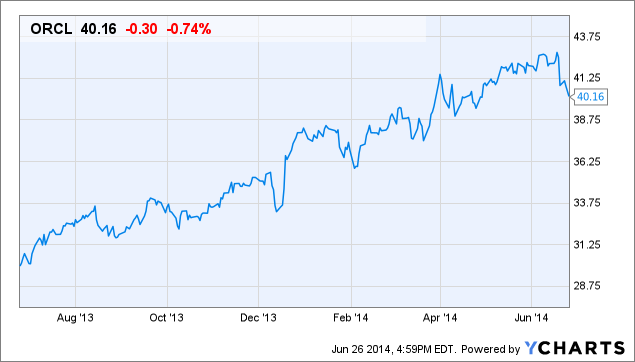