Oppenheimer analyst Akiva Felt weighed in with a few insights on Amarin Corporation plc (ADR)(NASDAQ:AMRN), after the pharmaceutical company released its second-quarter results last week. It reported 17.7 million in revenue from Vascepa, compared to Oppenheimer’s estimate of $17.9 million, a 14% increase over a soft 1Q15. Additionally, the analyst maintained a Perform rating on AMRN, while no price target was provided.

Felt wrote, “We maintain our 2H15 sales outlook which assumes continued mid-double-digit growth. Recall AMRN won a ruling by a federal court granting Vascepa NCE status, thus invalidating current ANDA applications and allowing it to potentially maintain Vascepa exclusively until 2020. On Friday, a US District Court judge ruled in favor of AMRN’s right to discuss data from ANCHOR trial data with physicians, facilitating a more “off-label” type marketing approach without a new indication or the ability to change public advertising.”

Bottom line: “We maintain our Perform rating on Amarin as we feel the current market cap of ~$425M properly reflects the company’s stand-alone value. That said, given the unexpected NCE designation and ANCHOR free-speech victory, Amarin may be in a position to attract strategic interest, which could re-value the company favorably for investors.”

According to TipRanks.com, which measures analysts’ and bloggers’ success rate based on how their calls perform, analyst Akiva Felt has a total average return of 34.5% and a 61.8% success rate. Felt is ranked #24 out of 3728 analysts.

Out of the 4 analysts polled by TipRanks, 2 rate Amarin stock a Buy, while 2 rate the stock a Hold. With a return potential of 147.5%, the stock’s consensus target price stands at $5.72. 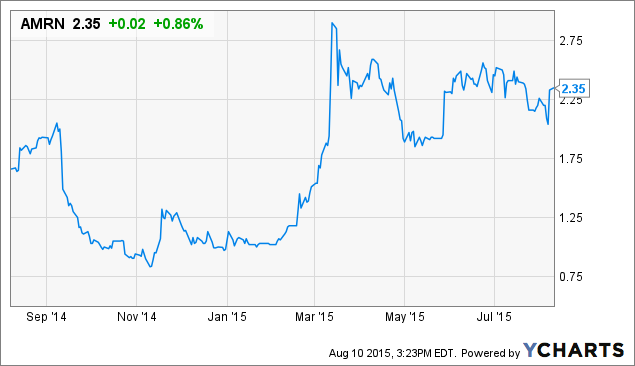