Oppenheimer analyst Christopher Marai came out with some insights on Incyte Corporation (NASDAQ:INCY) after detailed data from the baricitinib BUILD and BEACON P3 studies was presented at EULAR (The European League Against Rheumatism) last week. The analyst reiterated an Outperform rating on Incyte with a price target of $121.00. Shares of INCY are currently trading at $103.68, down $1.81, or -1.72%.

Marai noted, “We review: (1) Detailed EULAR data presented last week, we believe differentiates baricitinib; (2) ASCO/EHA presentations for INCY’s Jakafi’s immuno-oncology application in pancreatic cancer, pre-clinical IDO data, BRD-inhibitor upside and interim P1 results for PI3Kδ (‘400093) plus JAK1 (‘039110) combo studies; and (3) overlooked P2 data for baricinitib presented at ADA that demonstrated the drug’s potential in diabetic nephropathy. We believe this potentially $5 billion opportunity with double-digit royalties owed to INCY of up to 20’s%+ is not yet priced into the stock.”

“We note baricitinib and ruxolitinib are both JAK1/2 inhibitors, vs Xeljanz a JAK1/3 which may contribute to differentiation on safety/tolerability.” Further, “We see 2016 upside in IDO with potential checkpoint combos (pg 13), PI3Kδ and JAK1 combos (pg 13) and BRD a hot-new oncology target.”

Out of the 9 analysts polled by TipRanks, 8 rate Incyte stock a Buy, while 1 rates the stock a Hold. With a downside potential of 7.0%, the stock’s consensus target price stands at $96.38. 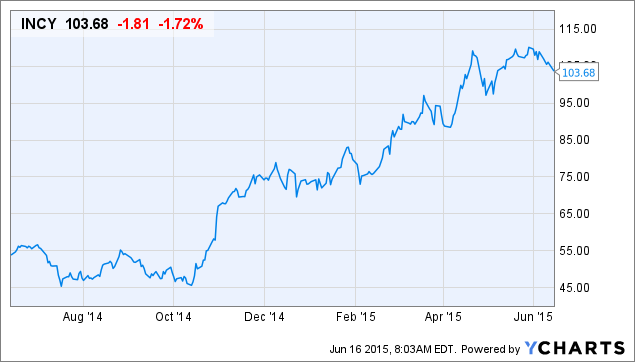