Openheimer analyst Rohit Vanjani is weighing in on Opko Health Inc. (NYSE:OPK), after the company released its first-quarter results, posting revenue of $30.1 million, above Vanjani’s estimates of $20.4 million, largely due to $295 million upfront payment received in Pfizer deal. The analyst maintained a Perform rating on OPK, while no price target was provided.

Vanjani said, “Shares of OPKO have traded flattish in the current quarter. We believe the recent EirGen acquisition was incrementally positive and could provide a small catalyst. OPKO paid roughly $135M in cash and stock for an asset that potentially provides manufacturing capabilities for vertical integration, tax incentives, existing revenue and cash flow, as well as pipeline products. We should begin to see the benefit of EirGen in the revenue line beginning in 2Q15. With respect to Rayaldee, the timing of the NDA filing has slipped slightly to the last week of May. Management noted that the push was purely administrative.” 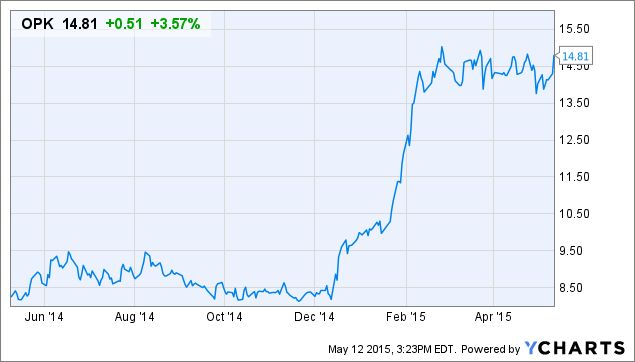