In a research report issued yesterday, Oppenheimer analyst Brian Nagel reiterated a Perform rating on shares of AutoZone, Inc. (NYSE:AZO), after the company released its fiscal 2015 fourth-quarter results, posting EPS of $12.75, up 13% year-over-year, compared to consensus estimate of $12.69. Total sales increased 7.9%, to $3.290 billion, ahead of the $3.03 billion consensus.

Nagel noted, “We look quite favorably upon the largely in-line fiscal Q4 (Aug.) results that AutoZone reported earlier today. Consistently solid results have largely become the norm for AZO and the Aftermarket Auto Parts sector broadly. We view the solid macro backdrop that has helped to propel sales at AZO as solidly in place. In Q4 (Aug.), comp sales rose a modestly better than planned 4.5%. We are increasingly encouraged by the efforts of AZO to more aggressively invest in driving its commercial and DIY businesses through a stepped-up commitment to improve in-stock positions. We do not foresee an inflection higher in results, but instead expect such efforts to elongate an already compelling trajectory for the chain. Our Perform rating is predicated solely upon valuation.”

According to TipRanks.com, which measures analysts’ and bloggers’ success rate based on how their calls perform, analyst Brian Nagel has a total average return of 8.2% and a 61.3% success rate. Nagel is ranked #266 out of 3766 analysts.

Out of the 15 analysts polled by TipRanks, 6 rate AutoZone stock a Buy, 8 rate the stock a Hold and 1 recommends a Sell. With a downside potential of 5%, the stock’s consensus target price stands at $701.23. 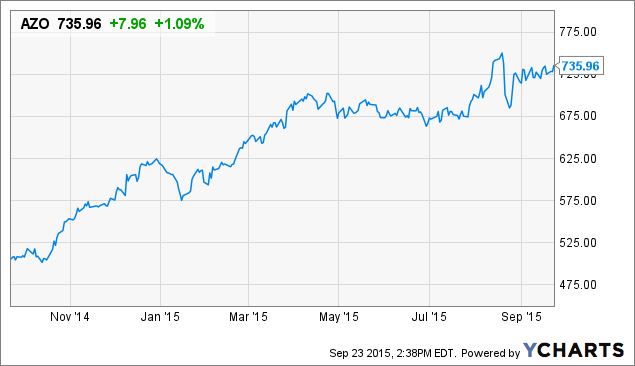 AutoZone, Inc. (AZO): One of the Great Stocks of the Decade